A couple of weeks ago, Patrick Stock of Ahrefs released a bombshell report showing that on average about 50% of queries in Search Console are hidden, ie classified as anonymous. I reached out to Google, giving them a chance to respond to this, and the result led to Google updating its help document on anonymous queries and the export/API capabilities.

As an FYI, I covered this in some detail at Search Engine Land yesterday but this deserves a mention here and more attention from the SEO industry.

Google cannot call 50%, and in some cases over 80% of queries being hidden for some sites, “very rare,” as I pointed out to them. So Google updated the help document to be more reflective of what is true. But truth is, it should not say “some,” it is way more than “some.”

Google also added a section about “other limits on queries” that says “due to internal limitations, Search Console stores top data rows and not all data rows. As a result, not all queries beyond anonymous queries will be shown. Instead, the focus is on showing you the most important ones for your entire property.”

These changes went live on Friday, again, I knew about this then but I held the story for Monday so it is more visible and SEOs are more aware of this.

The Ahrefs study looked at 146,741 websites and about nine billion total clicks and it compared the total clicks by URL compared to the clicks by query reported in Google Search Console. It found that Google hid 46.08% of all query data, or as Google calls it, classified them as anonymous queries. 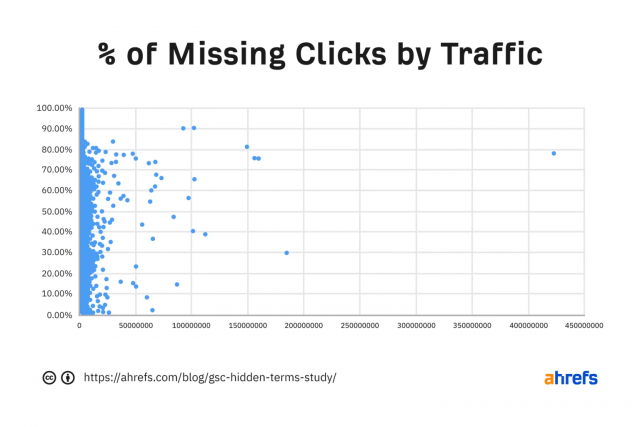 You can see how this works on your own site because Patrick Stox made a Data Studio report that will show you. Here is the reportand here is what you do to replicate this:

These help doc changes are not a change in any new behavior from the reports, it is just Google admitting it is more than just “very rare.” John Mueller of Google confirmed that on Twitter:

Brodie Clark has a nice look at the before/after of the help doc:

Heads up: Google just added some new info to their Search Console performance report doc. In the ‘Anonymized Queries’ section, more details have been added about query limits related to storing “top data rows” (not all data rows) 😒https://t.co/VCEeXpiYXk pic.twitter.com/4WiPBq4mO5

I guess I at least influenced a change to the documentation with this study. https://t.co/0BF0vsMzYW

Very rare > some
And they explained the reason as being internal limitations and only top data rows shown. https://t.co/uLUFycuc8N

And Glenn Gabe on how big this can be for some sites:

Yep, the doc was updated on Friday by Google. I’ve seen some sites with over 80% of queries being filtered. You can check this by using the GSC API. Beware, you might be shocked with what you see… https://t.co/7SQr7hVG6M

That said, we updated the docs to hopefully make clearer what really a lot of SEOs already knew, that long tail terms that are very rare can add up. Plus a new section to explain what users of the API apparently knew from other docs — there’s a row limit (not new)…

But yes, there are indeed concerns about privacy. Search Console, I think, does a great job at providing huge amounts of site info in a way intended to help marketers while also protecting privacy. If we can provide more, we’ll certainly look at that.

This is data in 2022 and I doubt it will get better but you need to be aware of this and check the Data Studio report to see how big of an issue it is for your sites.